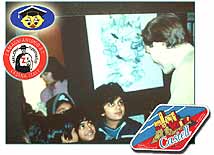 There have been many attempts to put teams together that ‘gel’, but on the internet, most of these ‘teams’ have been in pairs and part of the mating game – a momentary togetherness for life, or shorter, for the benefit of two people and maybe their immediate offspring.

Fewer successful sites exist to ensure teams of two or more, link for the equally challenging aim of ‘Progress’, and for ‘Progress’, I elude to the many prosperities that can come from commercial, social, political, ethical and spiritual well-being.

The whole ‘union’ thing that is meant to keep the world going around, too often breaks it apart. Just one bit of bad-will in the air and partners, customers, guides, leaders, and followers, speed to their ring corners and come in fighting. If the bout lasts too long there’s usually a winner and a loser via the courtrooms or other war zones of the World. If we are to fix this problem for good, there need to be winners all round and therefore, ‘unions’ need to be better arranged so they do ‘gel’, long-term.

One thing I have noticed that seems to work is “profiling”. ‘People dating sites’ spend a lot of wasted screen space, intentionally, on green eyes, music preferences and ethnic origins – as if that chemistry set will create the perfect cocktail. And if you visit a business to business site, trafficking in CV’s, products, services and trading histories, it is usually a shop window for some dedicated group of accountants, solicitors or a finance house. Few such sites seem to make use of serious profiling methods to create unions with a high chance of getting somewhere.

Whatever your quest ahead, there are many benefits in growing good teams of two or more, and if you are looking to team up for more fun and better progress then read a few sites on ‘profiling’ and start to pick your future partners based on their ability to match and balance with your characteristics. (If you end up swamped with thousands of search results for steel or plastic profiling, search for useful writers on the subject like Prof. Meredith Belbin and follow the links.)