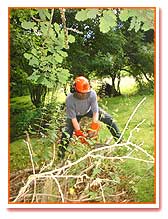 One of the largest landmarks here, the Great Sycamore, has recently had some tree surgery work on its lowest large branch to remove a ‘pond’ that formed since this branch cracked off near the trunk over 10 years ago. The exposed heart-wood rotten down creating a hollow for water which reached into the main heart wood of the trunk.

It has dried out now. As long as the tree itself doesn’t grow to seal the hole cut to ensure all rain water drains out, then the ponding will not occur again.

Like all good life, please send it your best wishes for a healthy recovery. It’s the Largest Sycamore at HoBB Real and shades many a picnicking friend.

Thanks to all on the ICQ Gardening Message Boards and those at the Yahoo Club ‘Crazy Gardeners’ for all their tips. All best to your long life. Thank you. 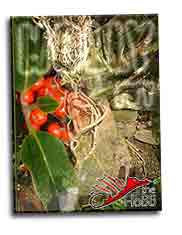 The National Society for the Protection of Cruelty to Plants (NSPCP)

For years, we have run a Plant Rescue Centre and when plants have outgrown gardens or have been uprooted and dumped by the roadside, they have been rescued and given a home.

At the HoBB, our first rescue operation took us only a few miles south to a garden that was being subjected to major new developments. The plant owners were trying to find good homes for lily, hydrangea, mombretia, honeysuckle, clematis and many more plants, some that had made 12 years undisturbed growth. We re-homed many of these in a new artist’s garden near Swansea where they will inspire and become the subject of many wonderful paintings.

Recently we found three 40cm wide domes of saxifrage, yellowing and almost dead, upturned with builder’s rubble at the side of a road. They were probably between 6 and 10 years old and were rescued and taken back to the HoBB and given fresh compost mounds and daily misting. After three months we managed to get some new green shoots on them and one of them is now planted out into the HoBB Gardens and has put on about 10cm growth. The other two wonderful domes are doing well and we plan to show them.

It might be a long time before we see NSPCP stickers saying “Plants are for life …. not just for Christmas”, but the world waited too long a time to see the start of the NSPCC and the RSPCA. Once, not too long ago, children, wives and animals were treated without respect. In some regions, this lack of respect continues but in many more places there is still too little respect for plant life, a legacy that we should not hand down any further.

Respect of plant life should be intuitive without a working NSPCP.
We all need to foster a full working respect covering the whole environment as it is a part of us; inseparably we co-exist, if divided, everything we have worked to build, decays. Which generation wants to re-instate the balanced way and which take the flak for disruption?

The picture (above) shows ‘the holly and the ivy’ , and at the rising of each sun they give so much. At the HoBB, these two plants are given good earth and space to live in, yet rooted to the spot, they have a set leeway. Our leeway is one ‘blue’ planet within space, as rooted to our spot in the universe as any tree. For us to grow, we also need good earth.