So in less than 100 years the animation film industry creates the quality of ‘Finding Nemo’.

What future the role of acting unless in voice over or motion capture form?

All budding actors selling the rights to their avatar selves in perpetuity, have one shot, one sale, one chance to negotiate their image rights – do not get it wrong. There’s a UK hoo-ha over the way bogus beings are assuming ID’s that are not theirs in order to fraudiently obtain goods and cash but what commotion will there be when all police have gene-scanners. Gene-scanners will be able to scan all litter to find out the phone number and address of the person who dropped it. Gene-scanners will be routinely used at the scene of all crimes to discover who was there. Gene-scanners will be available to all curious mates to find out who’s been ‘close’ to their loved ones.

How safe are your genes? Do you own the property rights to yourself?

At the moment, mobile G3 hand sets do not have gene-scanners fitted as standard but by the time G4 or G7 technology arrives, gene-scanners might be common. Can you imagine a paper-chase world where every bit of paper you drop has everybit of information about you upon it? Rather like the potential of a magnetic strip on a card but thousand-fold.

If it can be imagined, it can be created. That’s the way of the world because we are the result of our thoughts. Disney’s Imagineers are prime examples of the power of intent. The practical ones ‘follow’, so be careful what you think! 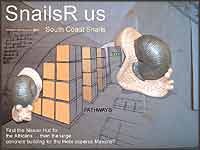 The Last time we had a good weekend chat at the HoBB about snail farming ( heliciculture ) seems ages ago but it was good to compare notes with Val Cornford from South Coast Snails (SnailsRus) who remarked on leaving, “I’m all ‘charged again’ now, which is exactly what I wanted”. What better results could you ever wish for after a visit to ‘HoBB Real’.

When I was still wearing short trousers, I collected sea shells everytime I went onto a beach and even the occassional garden snail. I can’t say I was too keen on the creatures inside so would pick them up slowly to make sure their owners were out at the time – Conchologist tendencies rather than Malacologist I was told. Funnily enough, I have kept my interest in shells but now also like the mussel creatures inside especially when cooked in a little wine, cream and garlic.

I mention this because I am ever curious about the changing state of the UK snail farming industry. I have tried plain home made escargot but my tastebuds needed the garlic recipe. One day I hope to be invited to the South of France and experience escargot how it should be prepared so I’m open to invitations if anyone out there knows the secret.

There’s one UK Snail farm just South of here at Credenhill and I keep up to date by exchanging thoughts and ideas with two UK heliciculture enthusiasts but despite the market demand being over the supply, the whole UK scene is a shadow of what it was. If anyone can throw some light on the main reasons why it’s not more common in this country, please let me know. Maybe, like me, we Brits enjoy shells when their owners are away, especially the gardeners amoungst us!

Whoops, before I go for a cup of fair trade coffee, did I mention that computer scientists are looking at the information laid down by slugs and snails within their slime tracks? Apparently, they embed a code in the slime to tell others that cross their path a whole load of information about where they have been and what was there. The slime film of data is so thin that it might give clues to how we can create biological computers to overcome the physical size limits of silicon chips.