In this First Issue, our small yet powerful hero Eddy Champion, speeds to the rescue as one of his fellow earth creatures is trapped in a perilous watery downpour unable to reach safety.

As the Editor of this comic, I like it. I like the artwork, the passionate drama, the use of cool viewpoints and the way in which a heart warming simple story is shown to be so important to those deeply involved. I could go on and dish out a load of compliments but I’m the one wearing the rose coloured glasses so I’ll pass on that idea. Instead, read two of the ‘Reviews’ we rather liked from RJJ and Gavin Burrows :

EDDY CHAMPION #1
“Produced to provide support for registered educational children’s charity World of Water.” Little water conservation actually happens in this issue though, we’re introduced to Eddie — a superhero parody grub who saves snails from certain death. However, we’re promised in future issues he’ll be “right up there fighting the real problems that hit our own planet.”
The artwork’s accomplished in a post-EC comics kind of way, (perhaps a big influence as they insist Eddie is addressed as “EC”) if a bit too static and photo-referenced in places. It looks livelier when letratone is added (which it is for the cover and pin-up but not on the main strip). I also found the duplo-sized lettering a bit intrusive, but perhaps that’s a concession to the kiddie audience.
Given the content and intended readership I’m not sure a cartoonier approach would’ve been more effective, especially if the idea’s to get kids to relate to the character. But maybe that’s just me preferring cartoonier stuff in general.
‘Educational’ matters (hate the word but I can’t think of a better) definitely work well in comics. I think I’d prefer to see a post-privatisation version of the Thirties Superman, where wish-fulfilment figures get to kick the shit out of the heads of Yorkshire Water. Yeah and then hand them out among schoolkids…
(Gavin Burrows) **

This professionally designed booklet sees the launch of a new super-powered
grub and his mission to save a falling snail. Gorgeous dark artwork is
incredibly out of place in this simple story of insect adventures. Its
simplicity is its failing and its environmental message overpowering. (RJJ)

** ( Editor: Funnily enough Gavin, ‘World of Water’ pitched a post-privatisation version of the thirties Superman to Severn Trent Water who adored our approach to their water treatment and supply ‘Educational’ matters, acknowledging that our ideas would be effective in Water education, but felt that they would not work in print on a ‘stand-alone’ basis. ) 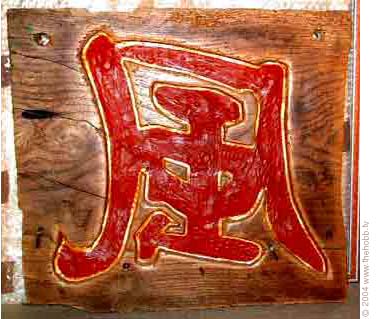 Using a slab of Welsh oak from a woodworm farm, some careful island cutting, then painting, this replica Chinese Sign has now guided the makers of a full set of signs in use on a new shop frontage.

Designed and constructed here at HoBB Real, this design model made use of sound wood that whilst riddled with both woodworm and death watch beetle attack, provided the antiqued look required. The sheet was bonded to a new backing board after cutting the letterform then treated with a preservative to halt further infestation. After drying fully, this sample was bees waxed but those on the shop front will have a coating of resin.

In case you are wondering, the Chinese Characters used are for Water, Fire, Earth, Stone and Metal as these elements guide the work of our good friends David and Rose.

I’ve reclaimed willow wood with wet rot, turned tree stumps into fern planters but this is the first time that I’ve been so close to the devastation caused by insect larvae attack. Some of the eating patterns even looked like computer circuit boards!