Tackling a garden surrounded by wildlife can be tricky. Trying to avoid molehills and stepping out of the way of landing wood pigeons seemed the right thing to do on arrival at the HoBB as we were the newcomers. But things were not in balance.

As soon as we started to supplement the plantings with new flavours we unwittingly created an a la carte restaurant for hosts of new wild customers from caterpillars to crows.

This new ‘open invite restaurant’ was particularly popular in winter when a lot of the wilder natural growth had the good sense to die down and hide in root form. We noticed families of rabbits at first then, as we were composting everything, the moles descended to feast on the resultant earthworm breakfasts, lunches and dinners.

Only the box bushes, ferns and Ivy plants remained uneaten.

We needed an action plan that did not involve the building of a walled garden. And so the unofficial National Ivy Collection of Wales was started with over 180 varieties of Ivy (Hedera.) Most have done well and by careful planting I think the word has got out to the local rabbit population that THIS Country Restaurant serves ivy with everything !

The caterpillars? Well this is another story. We love butterflies, so as it is the Vegetable Plot that gets the worst of it, we are going to construct a screen house with a fine screen that should stop such colourful visitors. I have not found an ideal screening material so if you have a screen house that it working well, please contact me and pass on the details of your screen supplier. thank you. 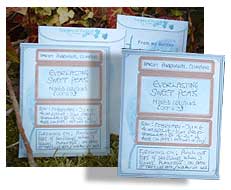 Helen keeps a seed collection of many plants that are established at the HoBB Gardens.