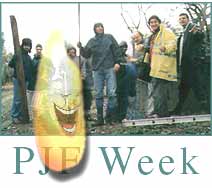 Treat yourself to a secret present making session. Forget the known and predictable, and take the time to create an individual gift in secret – we do at the HoBB!

Have you noticed an increase in the ‘habit’ of publishing ‘Want Lists’? These lists might be fine when reserved for Weddings and letters to Santa Claus but now they get published online and whole families exchange lists year round.

I love creating and giving surprises at all times but especially on non-birthdays. Sadly, the commercial world has latched onto every calendar event and now creates great gift-expectations. The pressure to have what is produced and for the reason it is produced is as manufactured as the products themselves.

I saw some programme suggesting that this pressure was causing a serious problem termed ‘Lifestyle Anxiety’ . So serious is it becoming that it may lead to voluntary advertising controls that forbid hitting susceptible markets like children with endless toy adverts.

Advertisers are great at pulling the strings but we should not be creating puppets of our young or ourselves. If we can get away from ‘expecting’ presents through giving presents at unexpected times and in unexpected ways we’ll all be far more flexible and at ease.

The two presents (pictured above) were way off the scale of ‘usual’. Both were created here at the HoBB on secret present making missions. One is a piece of Garden Sculpt made from stones collected in the recipients garden and the other was innocently placed on a birthday girls breakfast table – the contents of the jar were hand made and tasted wonderful but also the ‘own brand’ one-off home produce label held many a personalised birthday wish!

To make a secret present you need a secret location tucked away in the hills – contact us, we just might know of one.