Nestling in the countryside amidst mature Welsh Oaks and rich green Holly trees, it can seem cut off from the busy rush of life. But out here in the rolling hills, there is a real opportunity to have bright thoughts in the woods, hot chat over the cooking fires and cool ideas whilst carving concrete.

On one such occasion, whilst storytelling, singing and watching stars around an oak smoking camp fire, the topic turned to today’s ‘communication’ methods and a recent survey by Jeff Hancock of Cornell University that indicated that people are twice as likely to tell lies in phone conversations as they are in emails.

This is due, says Hancock, to the act of taking time to think and write a response, coupled with the knowledge that written communication, being recorded, could later be used to hold them to account.

His survey results, on Conveying Truths across a range of communications media, were presented at a conference on human-computer interaction in Vienna, Austria where many psychologists were surprised. We did a study on the emotive use of different communication systems following an ‘Adopt-a-box’ project for Royal Mail Midlands (above picture) and we discovered that genuineness, rather than truthfulness, can be beaten out of some people by the specific social circumstances within which they are raised.

We write this Web Log site as a genuine grain of truth from one perspective and we are ever-keen to have the truths we believe to be ‘true’, turned up on their heads and transformed. By getting back to me with your comments you take us forward. To avoid ’email catching’ programs that scan web sites gathering up lists of email addresses, we do not publish our email address thus attempt to avoid loads of typed spam emails which, contrary to the findings of Jeff Hancock, seem to be packed with mis-truths. 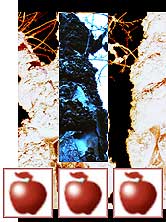 If we had listened to ‘others’, the two cankered apple trees above the HoBB Barn would have been taken out and burnt. We opted for saving them both.

When we took over the caring for these trees, each produced one or two apples. With a good mulching, hard pruning, and a lot of love, we get a full harvest alternatively from each – despite their canker growths.

The trees ‘live’ and they are therefore survivors. The canker tries to knock them but fails. If we had knocked them by axe and chainsaw, then we would have failed them. If life tries its best to live to its full, we should have the sense to support it as only a fool interrupts a winning struggle.

It’s often a ‘struggle’ to win through, even for the plants we call weeds. Somehow though, the recipe for success is to know this struggle rather than tear it out and start anew. We’ll certainly buy some canker resistant apple trees but as additions not replacements … and so the HoBBian Gardens grow stronger.