Once a sheep farm deep in the Shropshire / Radnorshire borderlands, ‘HoBB Real’ now has another life: as an oasis of thought, real action and energy renewal.

This is the place to action your plans alongside creative thinkers. We provide the setting and make the opportunities for friends to tackle their own projects and for volunteering in and around the organic gardens.

Naturally, during private projects and the personal programmes of friends, the HoBB Project House and Gardens remain ‘reserved’ for the duration. But around this part of the World in Wales, there are many Castles, an annual Victorian Street Fest., the famous Hay-on-Wye literature festival, the Centre for Alternative Technology, National Parks, Portmerion, music weekends, stone carving courses and many Easter, Summer and Autumn Family Activity Holidays.

The HoBB is a meeting place for thoughts and a working place for realising dreams. It has grown a character and atmosphere of its own nestled within its vegetable, herb, and flower gardens, black mountain sheep, mature native trees and living structures all surrounded by the green hills and meeting waters of England and Wales.

We want International friends to benefit from a progressive time here so have a good chat with us first before you set off to visit us. 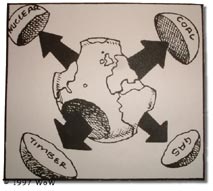