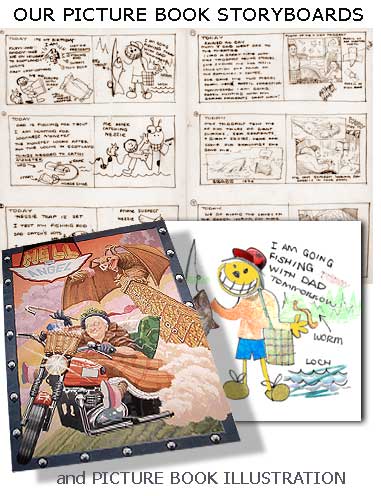 Most of our Children’s Picture Book Storyboards are BIG – on A2 Sheets 420 x 594 mm. This makes it easy to see standard 12 double page spreads in one quick glance at meetings with busy editors. Some storyboards are presented in book form to highlight any loss-effect of the gutter. 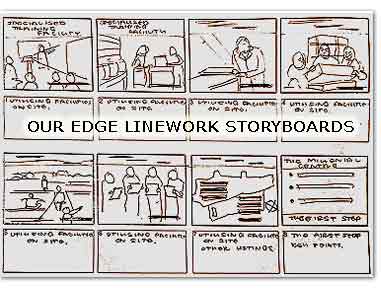 Simpler storyboards, drawn in outline (example above), are all that’s required for meetings where everybody knows the full production details. 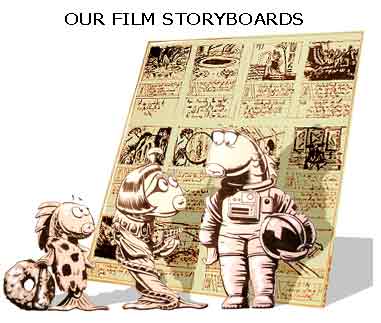 Storyboards for film require more design as they include information on lighting, viewpoint, sound, cues and movement. The above storyboard for a TV series on the ‘History of Water Use’, was pitched by World of Water to the BBC and included all the above additions and also Character Design Charts for the series animation content. 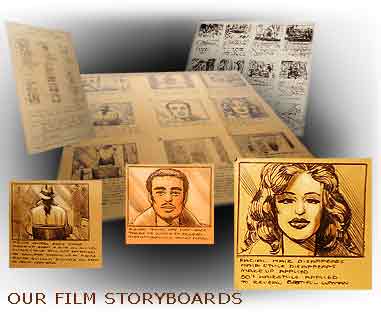 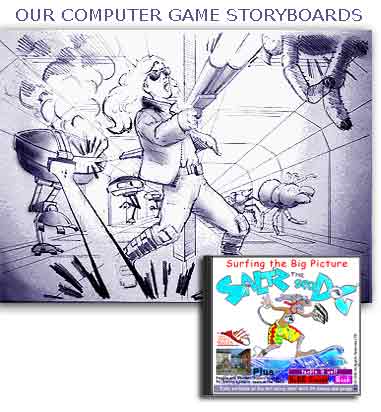 Whatever sequences you need to present, from exhibitions and live shows to computer games and educational videos, storyboards set the scene and make a fast efficient focus for everyone.

This is the story of a book, moved beyond the control of its authors by a strong spirited girl who refused to be sidelined.

It is a story of a fully charactered world, part first life, part third. A world one would probably never make a conscious effort to avoid but would walk on the ‘other side’ to keep it at a distance.

This is the tale of a young girl, Jane Brinkly, who wants her life to be a story – one with a storybook ending.

Jane is forever curious and one day she is given a conditional wish, allowing her to view this world from the safety of its edges so long as she does not stray inside the margins.

She finds it a tough but fascinating journey and by holding on to her focus,  she does seem to have a fairly storybook beginning and middle. 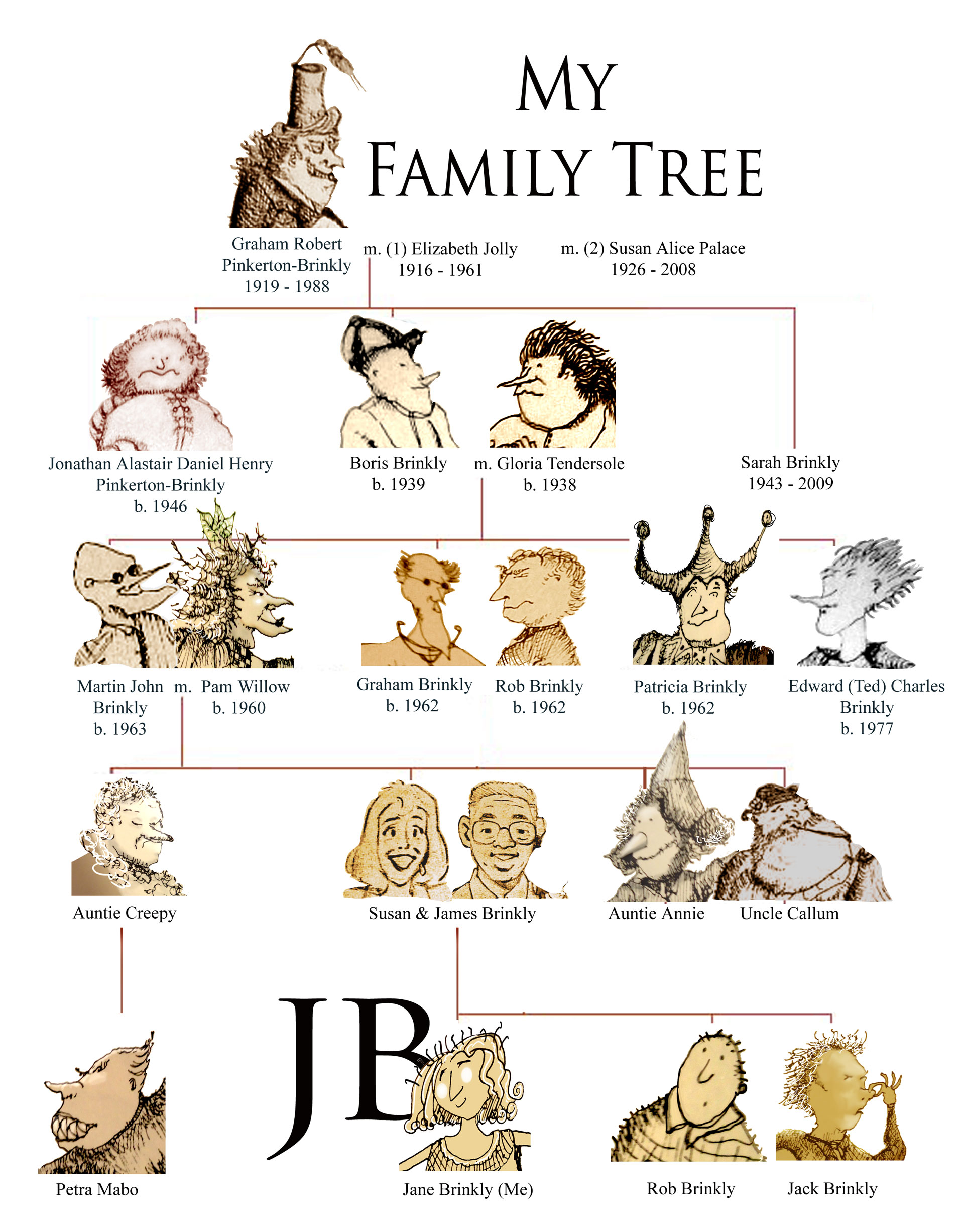 Jane is a young author. She has written a book about the people and pets she knows, and is annoyed that the production of her character-rich book has been put to one side in favour of some secret new book.

“The author of the story introduces members of the lead character’s family tree using doggerel rhyme which part-profiles them in a ‘tell-not-show’ , old fashioned ‘Victorian’ manner that I found intrusive. Though these rhymes are typeset and easy to read, I found the design too artistic when the lead character, Jane Brinkly, speaks of her family members in a ‘show-not-tell’ dialogue manner, which appears in handwritten form. The story would look better animated than printed.

The general reader will follow the parts of the central story – those linked with Jane. The reader who becomes immersed in the book and picks up on several story threads in the images and text, will enjoy the many sub-plots. “

Author’s Comment
“Nowadays, we subject ourselves and our children to a rich multi-media, multicultural and multi-technological world. Some children’s books reflect this world. Some ignore it.  My book makes it into a sandwich by exploring its growth potential on one slice, spreading direction on the other slice, and filling it with a similar unknown mix that goes into pre-packed party vol-au-vents.” (Author)

“You kept your promise. I lost my wish. But now I realise, everyone should have their say.”

There is one central character in Jane’s story. Jane.

She takes over the role of storyteller, guiding both reader and fellow book characters through her own exploration of her book.

Characters in her book include:

“They have stopped doing my story.” Jane said. “I have been sitting on this shelf with you two for three long weeks waiting for mine to start. I wonder what’s so wonderful about that new story?” Tapman blew a bubble into the air with a bright rainbow in it as he felt how upset she was, Pluggy said “Perhaps the other story is stranger than yours.” Jane gave him a look, the sort of look that would plunge most plugs back into their plug holes.

“My story may seem strange to you Pluggy,” Jane replied, “but at least it holds water!”

“Water?” Tapman looked up when he heard his favourite word. He closed the book he was reading and took off his second best hat to scratch his screw. “I’ve worked out a way to  get you inside that new book .” he said. “This is a job for Helitapter.”

I started to write this book following a two-week ‘artist-in-residence’ with the UK Reg. Charity, World of Water (WoW). During the residence, I scribbled 26,000 fairly useless words but over one hundred finely detailed line drawings were created. These drawings were used in an exhibition at Café Surf to promote the Charity and raise awareness of its community work. The drawings are story-rich and upon seeing them, everyone becomes keen to know the story behind and within them. Each time I translate them into words, a fresh story grows.

So that is where my journey to create the book of the drawings began.

I created a light whimsical telling style for this tale, thinking that words kept to their barest bones would attract a young readership, but at each live telling my audience has demanded ever greater depth. So now, in live tellings, I let the illustrations do most of the work. They are rich in ‘message’ and open-ended thought, so all my readers, adults and children, ‘close’ on issues in their own way.