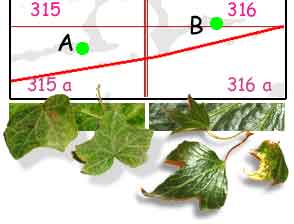 Holding a steep 45 degree bank of earth together whilst moles try to live within is not too easy as each time a mole disturbs the earth it cascades.

Hopefully, the roots of Hedera helix Kolibri will emesh the bank and restrict the moles’ activities

For ages, our “young” dog, Tuppence, has enjoyed popping through to the next door neighbours under a hedge-line to scrump for apples in Autumn. Today, with the help of Hedera helix Albany, the gap under the hedge is now filled.

( French help by the one and only Eva Booth)

“Will the flying Coach please stand up.” (Illustration and excerpts taken from ‘Cochi’. By kind permission of Little People Books ISBN 1 899573)

“In the mind of Cochi, germinated a seed that one day she would fly. No amount of reality ‘life coaching’ sessions convinced her to the contrary. She would sit awaiting her passengers in the Airport’s Coach Park visualising clouds on all sides with a passion for flight beyond the imagination of most planes. To be a plane inside a coach body, stashed away in garages not hangers, was something she planned to change. Right now, it was her own values and beliefs that counted, not some trumped up National mechanic know-it-all lacking in respect for the way things should be – the way things were going to be.

Her vision was well defined and the sky was never the limiting factor. Her quest to master flight was an ambitious yet natural wish. One of her passengers told her that people looked at birds and wanted to fly – they had two legs and two arms but the ability to dream; she already had a big engine, seats and four wheels so for landing, taxiing and taking off she already held an advantage”

The Story behind the Story
The full tale of ‘Cochi’ is closely related to the “Little Steam Train”. Being ‘over-full of toys, for all the girls and boys’, and seeing a steep mountain incline ahead, it needed to tell itself that it could muster the energy to pull its load up the hill. “Choo Choo” went the steam engine, whilst, from the deep silences within, the “chi” (Qi) pulled the train ever-further to reach the summit and beyond.

Last Saturday, someone asked me, “Do you believe in Chi ?” I replied with a ‘yes’ but suggested it was a bit like asking me if I believed in the sky. I was also asked if I practised ‘tai chi’ or ‘Qi Gong’ and I said ‘no’, for that is like asking me whether I stop to re-fuel whilst in mid-flight.

I believe that the whole journey is a continuum and we build up the energy we require whilst ‘being ourselves’. Those who follow flights contrived by others often need to land, re-fuel, and maybe turnaround. They are their own worst continuity expert and may need to hire a special life ‘coach’ to get them back on their road.

How did the story of ‘Cochi’ continue ? Well, when she was accepted as a plane by the other planes, she flew, she flew.

How did the story of ‘Cochi’ end? Like life itself – it doesn’t.