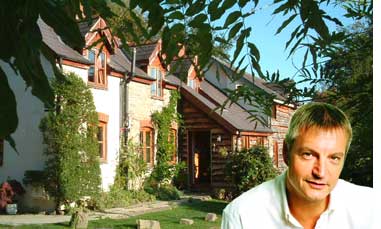 We are known for our design solutions. Many ask us, “What exactly are you doing at the HoBB?” This is probably because we have moved away from the metropolis and as far as big business is concerned, we have landed in some unchartered territory. It is true. We are exploring new ways of working – an invigorating quest to host our own ‘show’ at thehobb.tv

We have a Vision – we are building an enchanted garden in a peaceful country setting with unspoilt views. Several buildings are being ‘sculpted’, each nestling within the garden’s greenery. These are of green oak, stone and glass, using wool insulation and other low-tech building solutions.

We are exploring the very creation of our surroundings and ways. Within this green setting, we share our discoveries of Alternative Complimentary Therapies, organic food, herbs, art and music. Our friends contribute, encourage our progress, help our work and share in the enjoyment of the results.

Within the HoBB environment, we support the good growth of plans, projects and dreams. We hope to inspire others to create their own HoBB and thereby support the visions of many more.

There are several ways to experience the Real HoBB and it gives us pleasure to introduce Robert Neely offering ‘Personal Development, LIVE at HoBB Real’.

Too many of these ‘wanted adverts’ just state the article or service ‘wanted’ and nothing else! This is changing.

When I lived in London, I can remember one guy who would sit on the island in the middle of Piccadilly Circus looking dishevelled with ‘cap in hand’ and accompanied by a thin dog and a cardboard sign. He’d try to catch the attention of passers by with a plea for money but on his sign it would say “Wife and six kids to support”. He was well known to the local pubs and would exchange his daily coin collection for drink and end up starving the dog. I eagerly awaited the wanted advert from his wife for a ‘new look drier husband and a case of dog food’ but it never materialised

We have all been beset with so many sales adverts emitted from every commercial orifice for so long that the humble “Wanted Advert” has been pushed onto lineage only columns at the back of free newspapers and window cards in newsagents. And it has been of no help to the status of such adverts for some notorious murderers and thieves to have appeared on bill postings under the heading of “WANTED” – the last thing most of us ‘want’.

The first thing we all want is probably health and happiness but most people have now been sold on the idea of wanting wealth and possessions. The sellers of these newish “wants” happen to be the ones filling out most magazines, TV broadcasts and web sites with “Sales adverts” thus putting the squeeze on actual ‘Wants’.

This sad situation, if allowed to continue, creates some mixed up people who never really know what they ‘want’ until the next fashion is promoted.

Perhaps if we all reason out what we really want, whether it is simply a can of dog food or a drier, less dishevelled husband, then ‘Wanted Adverts’ might be more entertaining, meaningful and better answered – you never know who might answer your advertisement.

My wanted advert is for this blue planet to be able to support quality life for all of its animal and plant inhabitants. I support the UK Registered Charity, World of Water (No. 327188) because I believe that the starting point is to ensure all Waters are maintained clean for drinking and as habitats.

True, I don’t know who is reading this, my wanted advert, but it might be you, and you might agree and support those who work towards such a balanced blue planet environment. If your wants are similar, we should be working together so contact me.