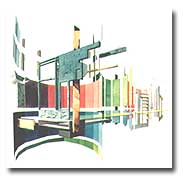 Designing trade shows has never been so colourful. One painting that always catches the attention of visitors to the HoBB was prepared by us as a trade stand design for a producer of paints and finishes.

Our design brief was to incorporate as much of their range as possible but in large enough panels to allow visitors to ‘dwell’ upon individual colours as they walked through an environment of walls and textures.

The last trade show I went to see was at the National Exhibition Centre in Birmingham. In the main halls, vast trade stands were under construction ready to be fronted by neatened well produced staff or specially trained ‘fronters’. The atmosphere was charged with ‘push’ and it made me pensive, thinking of the deals that needed to be done on these plastic and wood stages to keep jobs going and economies growing.

I went into the overseas pavilion where units were small and blood heats were normal. Here, the owners and managers of companies were talking to each other. Here, the day before opening, the simpler stands were in place as a morning market might be, ready for people to be greeted. Here, I was offered countless invitations and given warm smiles. Their enthusiasm for trade was almost bloodcurdling; I had to smile back, even though I well understood their power to drain the life of many established communities in partnership with many in the larger halls.

Did I hear that the photocopier was invented over 30 years before it was mass-manufactured? Did I hear the everlasting light bulb works and was patented but never produced? Did I hear of some U.S.A. Patented ‘Hobogen Project’ that delivers infinite worldwide electricity without polluting and using raw materials?

We have all heard such rumours but someone out there knows the truth. Are these just rumours or are useful inventions slowed or pushed aside and un-used?

Technology is certainly moving fast but it is also moving at a pre-determined speed, being constantly regulated by forces stronger than ‘logic’. This system of ‘timing advances’ is common, and the consumer has no way of knowing what would happen if all inventions were explored, prototyped and assessed for global or local ‘usefulness’.

As ‘new’ things appear regularly, we think that inventors are busy, happy and un-frustrated – or do we? Why was it that the inventor of the ‘clockwork radio’ found it tough going to get his great product noticed early and into production?

I know that many inventors are concerned about discussing their ideas because of ‘idea-theft’ and that sadly, some ideas never leave the drawing board, but there are things like ‘Non-Disclosure Agreements’ to help protect ideas whilst they are being discussed.

Perhaps most of the stuff we hear about the hard life of inventors is false, but if there is just one inventor out there reading this who feels their inventions should be making more headway, then the World should give them a platform from which to speak, as we depend upon such enlightened individuals.

Perhaps there is a web site I have not found yet? Perhaps it exists but few inventors trust to use it? Whatever the situation, if you know something I should know, let me know!