“To unveil fiction, and to create, as the result of our todays, the most useful advances for those ahead of us”. It’s one big relay race really.

Everyone tackles this from a different viewpoint, so there’s often a tangle – even a right mess-up at times. But it works because every new generation does a re-mix which is more appropriate for their moment and reviews the past as less organised and more primitive than the now.

It’s important that review and comparision continues if we want to stick around in human form. It’s a volatile universe and we are not very well equipped to survive at the moment – but we are (all?) working on it. As few of us know anything else but Earth Life, and we figure this planet makes a good ‘home’, we (all?) work to keep it clean and tidy, ready for newborns and fit for further use.

I opt for the above meaning of life, headfirst. My heartfelt understanding of life is far less practical but goes like this:

Meaning of life:
To maintain a rhythm that holds true for all by helping those in discord to re-tune.

Everyone gets out of step and individually, most ride the discomforts of life to party again. But some ill-fated people are pushed way off course, often as a result of power struggling. This can happen ‘big time’ around this planet: and these Struggles can be ingeniously engineered to create infighting which on a large scale can involve millions of hearts. Such scatty induced plagues nark me to the bone because they can lead to wars or hatreds which can throw the rhythm of life out of sync for centuries.

As there are great difficulties in kindling ‘love’ in areas where ‘hatred’ is taught from birth for example, the aligning of all to a harmonious ‘get-along’ future is some way off, but don’t let that stop you giving the process a nudge in the right place when you can because it will be well worth the effort. The sooner we are able to put aside ancient, almost tribal, rivalries and develop a progressive civilisation having one accord, the further we will get.

In reality, all factions will continue to debate the ‘best’ way forward and provide the descant. It is not until all people feel the way forward through instinct and intuition that we will start to arrive together.

Chin up folks and remember one thing about the ‘news’ that the media often put forward as headlines – If it appears to be packed with how terrible things are and seems very negative, it is because these are the very issues that we all need to concentrate upon and cure within our society. There’s lots of positive news out there that goes un-mentioned because it is not causing problems thus can be left to shine. 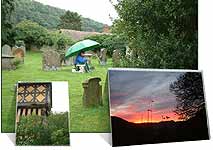 Taking a Creative Break to produce a watercolour or to make a willow basket was once so simple – now, most of the workshops locally are in crystal relaxation therapy or linked to some ‘Sisterhood of Pagan bikers’ (could be cool!)

“Let me paint the picture”. Okay. In the foreground of each weekday, a less than attractive shade of the usual 9 to 5 hours, best adult shushi, junk post and whoever calls in to fix the plumbing. If you are a seven days a week workaholic, your day plan includes a leaf through the papers, collecting your ‘txt msgs’ and emails, gobbling – then burning fuels to get you around, going ‘yeah’ too often to shorten meetings whilst avoiding the distraction of weird product promotions and phone calls from strangers saying you’ve won some ‘free gift’.  All this of course  bites into your waking life giving you less time to work out how you can spend more time at the poolside thinking of maybe more passionate interests.

Ideas on de-stressing, balancing and re-charging emerge just seconds before you take yet another call, and your creative and spiritual self only has time to contemplate whether or not a 7 metre length of bubblegum trodden pavement should really be nominated for this year’s Turner Art Prize.

Well, here at the HoBBian ‘poolside’, dipping our Chinese paintbrush into a second Martini Rosso in order to get that rose madder effect on a new night sky wash, we have been inspired by a no frills, plenty thrills group called ‘creativebreaks’. They have brought together a group of art and craft courses that are the craftiest and artiest we’ve come across in these hills – from silversmithing to greenwoodwork : with no regression therapy needed before you too can paint like Picasso!

As I discover ever greater evidence of “Rural Growth Wales” surrounding the HoBB, I’ll keep you posted, but I really should go now to research those ‘Women Pagan Bikers – The Dangerous Curves WMCC’ ! ;)