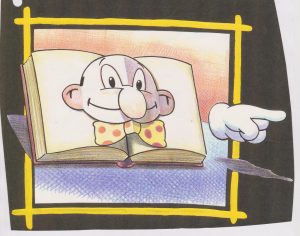 Here’s some of the stories I’m presently performing live:

Digger Mole
The perspective of a mole looking after soil and soil life. Too often, soil is neglected, especially by monoculture crop farmers, so this story aims to show how important it is to keep the soil environment in balance. The idea came from a map I drew of the ‘underground’ used by moles, worms, rabbits when a 4yr old boy and his mum were staying here on a snail farming course. The map already features in the book “Lost in Elfland” which is about a lost property office run by rabbits.

Post Box Baz
Using a set of illustrations of post boxes, this title takes a comical look at human communication from carving stones and smoke signals to waving flags and texting. Each design of postbox has its own character from one that plays baseball to another who is a Space engineer repairing communication satellites. The aim of title is to show how around the World, all peoples work towards a unity of understanding

Digital Hero
A new super hero who is digital, electro and pixel perfect. This hero hovers in the World of real life as a 3D hologram and in the digital matrix as a ‘spirit-in-the-machine’ (ref: classic film “Tron”).. Images of this hero are depicted in fragmented form and rarely if ever as a ‘whole’ entity. The Hero’s history is unknown to outsiders (humans) but like the Gaia suggestion in film Avatar, humans are eager to interview the Digital Hero to find out if the hero holds links to the constitutional parts of the Universe. The aim of the title is to stress how little we know for sure and how the wonder of everything is in-the-detail.

Eric Pie Flinger
Eric exists for those who hope hard enough to find justice. When things happen that are not FAIR, Eric is there to turn things around and culture positive results. Eric always raises spirits, sorts out problems and does the right thing – even if his custard pie flinging methods are somewhat outlandish.

Chubby
Chubby is simply out-of-condition and not into sport or the outdoor life until his mother sends him on an outward bounds course in the middle of a woodland. The aim of the title is to show how someone who is not the most physically fit and active can make a life-saving change to the environment through using his techy skills and being open to levels of communication with wildlife that are close to telepathic. The title promotes self-confidence and working with Nature
and technology hand-in-hand.

Magic Mill
An anti-pollution message around a story of industrial development, social concern, a ghost and a boy with his dog.

Magikory Tree
A title about developing trust and being open to adventure. A lot can be said for the benefit of learning through some risk-taking but for our hero, this story is more about home cooking and the wonderland around her grandmothers country house. The aim of the book is to underline the importance of outcomes and to be carefully self-guided through life’s adventures.

The Gumpleploo
A story, in whimsical nonsence poem form, about groups of people, a theft of time sealed in a cake and the solving of a mystery. The aim of the title is to introduce a new Wonderland without a central ‘Alice’ in it. This land, its characters and its happenings have a surreal disjointed nature which revolves around a series of drawings (see ‘ Nine Tenets” below)

Ring in the New
Three main messages jump out of this New Year’s Day title. These are, culturing enlightenment, openmindedness and gaining an eye for the future. The hero is a Christmas tree fairy who spends most of her year wrapped up in tissue paper, in a box with a whole collection of Christmas decorations. The scene is the same old scene at the beginning of the story but takes a ride through war zones, famine, drought and poverty through the title to come out shining in the smile of a new born girl. The aim of the title is to create a classic story for New Year’s day that brings hope for the year ahead. It makes me cry when I tell this story so it might touch the heart strings of many around the planet.

Grandma’s Pond
It’s a pond and below the surface is a whole World of aquatic wonder that pond-dipping with a net can’t reach. The aim of the title is to encourage young pond explorers to respect wildlife habitats.

HoBoGen
Energy, whether it comes from burning the oil from rotting vegetation or squeezing atoms until they split, has become the life-blood of human development. This title explores the energy that gravity creates – a seemingly mild energy with more force produced in one day than all the energy humans have ever consumed since the beginning of time. The aim of the title is to tilt energy producers towards using power that does not pollute and is future-proof. The story starts with one trip to see a legendary water monster that turns out to really exist. The story concludes with the birth of a clean new world of energy.

BookBod & Friends
When the last moments are close for any planet civilisation, it’s time to collate information and record it for the little library in Space. BookBod’s job is to gather all the records before their creators cease to exist. But maybe there’s a chance that two children can delay the day and show BookBod that it’s not time to draw a veil over the future of mankind. The aim of the title is to underline that each new generation brings hope of a better tomorrow.

Eddy Champion
Eddy is a grub or a bug or maybe a stunted worm. Eddy has been called a lot of names by those ignorant of Eddy’s super powers but for those Eddy has helped, Eddy is the simplest, kindest, nature-saviour on Earth. The aim of the title is to show how important it is to save and care for the micro as well as the macro-world.

Luciano’s Story
A tale of two eating regimes. One leads to health, the other to vast food industry profits. There’s a warning wrapped up and not so sugar-coated in this story of eating at the amazing Luciano’s. Obesity levels rise around every new Luciano’s outlet until the flavour of health takes a lead and the days of gluttony recede. The aim of the title is to create a question over the healthy profits made from creating foods that are designed to be extra tasty and over attractive.

Hello it’s Gina
Aimed to feed the thirst for the unknown and introduce ‘Gina’ who may be a dog or possibly a rabbit, but she knows her way around the Milky Way without the help of any Hitch-hickers Guide to the Galaxy. Gina is a specialist in Universe Relocations so if you want insider knowledge on whether Mungaws on planet Tsog really can create a 500 mile an hour sneeze after swimming, ask Gina. The aim of the title is to de-mystify and maybe mystify life’s little and big happenings around the Universe – an everyday story of travel at the speed of light, breakfast on the Moon and candle unlit dinner in a black hole.

Tapman and Pluggy
The team of two combine to really discover the ups and downs of being a droplet of water in today’s pipeline, cup of tea, vegetable or cloud store. The aim of the title is to highlight how water is treated, mistreated, killed of content, traded and de-natured as part of the evolving human water cycle. Tapman and pluggy escape, unsold, from a plumber’s closing down sale, to find the World of Water has changed since they were both manufactured.

Genius
Take one inventor (Genius) and let him sample from a growing DNA library and you get a mix-and-match story of new creation aimed to amuse and  worry the heck out of those who like animals and vegetables as Mother Nature designed them. Genius is a kind hearted biological engineer who has an overly creative mind. His creations are his family and he guards their privacy with his life – loving every 15 legged chicken, real sausage-dog and glowing blue pineapple in his home-based research Lab. The aim of the title is to make us “aware” of juggling DNA.

Hell and Angel
An unlikely friendship blossoms between a ex-rocker granny and an orphan bat as they burn up the road and split tornados in a hell-raising tour of heavy metal concerts and high tea. The writing challenge for this has yet to start but the front cover is ready. The aim is to write a new ‘odd couple’ story showing that the most unlikely of friendships can be astonishingly fun.

Morpher
This un-super hero creates more problems than solutions. The aim of the tale  is to poke fun at the idea that some utopic entity can ever cure all and to promote the self-help society where people tackle their needs on a team-by-team basis.

Fat Man Jim
Exhibiting a passion for personal size, nobody around Jim knows the secret of why he cultures his vast stature. Originally designed as an animation without words, this little story is the sweet and plump tale of a Sumo wrestler in training. The aim of the tale is to promote awareness of poor quality and incorrect closure.

Coachy
A tale to promote hanging on to your dreams as a coach delivers passengers to an airport and dreams of becoming a plane. It’s a tender story of hope beyond all hope and as Coachy once said to a pig, “If you can fly, so can I”.

The Alterers
Good intent is often misplaced and Alterers are specialists in misplacing everything. Everybody has experienced problems with Alterers. You first notice it when you know you put something down in a specific location and when you go to get it, it is gone. You question everyone in your known household – “Mum. Have you seen my red socks?” but for some reason, they are nowhere to be seen until they pop up in a totally unexpected place. You have a problem. You have
resident Alterers and you’ll never see them as they are almost transparent. The characters have been illustrated so this means that they have been seen at times.

KK + Genie Mouse
A title to promote teamwork, goodies against baddies, unlikely circumstances and most of all, the power of love. This title has been storyboarded fully, and when I say fully, I mean from beginning to end. We should be able to add some words to this and make it into a graphic novel although it was designed to be a theatre pantomime.

Then there’s the story, or 200 stories, I can only perform in a slide show at the moment:

Nine Tenets
Of all the stories that do not exist, nearly 200 of them are sealed in a set of inkline images donated to the World of Water charity by Oliver Tomlinson. I’ve looked at these images and know they hold many a tale but it won’t surface in word form. Ideally, one story or more would incorporate many of the character-rich images but somehow, each image holds its own story. There is presently no aim to these images other than putting them on paper. They are wacky, dark, humorous, light, edgy, surreal, daft, delightful and very curious. They are a new Wonderland waiting for a new Alice to string them into a flowing sequence.