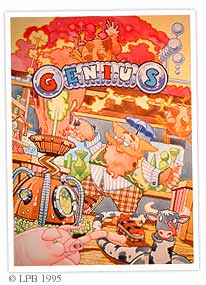 Genetic engineers are now working the building blocks of biology. They pop some daffodil gene into rice and the rice then produces vitamins it normally does not produce (I think it was Vit. A). I think they popped some gene from a deep sea fish into a mouse and made it glow didn’t ‘they’. I use the word ‘they’ as if I was not part of the same human seed I am, thus I should continue this with the word “we” I suppose!

Well what will happen when ‘we’ stop discovering ever smaller sub-atomic particles and reach the ‘unit-brick’ that allows us to calculate the coded recipe of all elements. Will sub-atomic engineers be able to use the lowest constituent parts to build ‘matter’ that has either, never existed before, or at least be able to ‘tweak’ the composition of existing elements so their behavior alters?

I often regress to ‘our’ pre-big-bang stage, when the sum of everything was in a rather dense unified form, or so the present theory goes. At that point in my pre-history, the ingredients I presently use to form my being would have been in rather a mixed up cocktail along with all the other ingredients ready to create what we now know as ‘everything’.

It is not a very easy state of ‘being’ to describe but the feeling of unified potential is ‘mammoth’ – like one pre-poppy seed ooze in a universally large developing seed pod but in a micro-kind of way.

When we find a code that is common to all physical ‘matter’ it will be another code as the biological one already exists. However such wonderful discoveries are made, the biggest breakthrough will come when we all willingly unite over future issues that are so much more important than now issues. We have a long way to go to find a code common to all social matters.