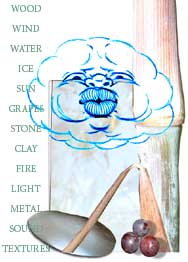 We can thank Nature for wood, metal, stone, clay, hay, cement, glass and plastic but some of the above require a lot of processing to produce them.

Consumers need to be able to guage the level of energy used to create such materials, and also the levels required to economically re-cycle products therefrom.

Whilst ‘profit’ remains the sole aim of a producer, they will be unlikely to come up with this information if it steers buyers away from purchase.

Some producers never realise how much it costs to get their producte to market because they never count the cost in terms of the environment and its social impact.

When raw resources, and indeed communities, are ‘there’ to be ‘had’, few suppliers and few consumers ever bother to think of the results. Now, those who were assured that “There’s plenty more Fish in the Sea”, discover a different reality. Was reality ever known or was un-thinking rhetoric easier to teach?

Do you repeat stuff that is now inaccurate? I probably do a bit, because I have not updated my understanding on everything so I go around saying things that I believe to be so as if they were fact. I am however willing to learn, listen and be advised of updates as I feel I have a responsibility to tell things as they are, not as they were.

Millions of people love to perpetuate the past misnomers because it saves them re-building their foundations and re-thinking their ideas. It was a modern author who suggested that everyone thought the World was flat. It was some other author who suggested that the ‘Dark Ages’ were ones of little progress. It was a series of authors who between them wrote other books on belief systems and probably coined the phrase “There’s plenty more fish in the sea”.

Too many people carry forward, not their personal ideas, but the inherited ideas of people who are not only dead now, but were putting the ideas down in the light of the history period experienced.

Whilst some things about the past are pretty interesting, to apply them wholesale to the future without update is folly.