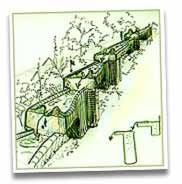 A builder friend, Paul, who by the way is interested in starting a company designing and building follies, visited the HoBB and told us of a water feature he had seen where a small trickle of water was made to ‘play a tune’ as it dropped, recognisable if you walked alongside it at the correct pace.

We thought we would have a go at making one:
It will be the overflow, trickle that will be built in such a way that each ‘drop’ creates a different note. With a bit of skill, we hope to create the very notes that go together to make up the HoBB Sound.

Have you seen or had a go at this idea? I’ve been told the idea is not original and it can work, but so far, nothing has appeared on the many net searches I have done. If you come across anything you think relates, let me know please. Thank you.