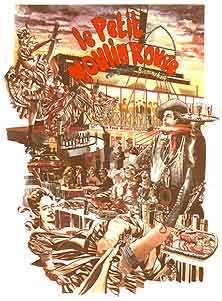 We’re selling off some of our stuff to fund improvements at the HoBB. You may notice a few opportunities on this site to buy a bit of our history but it’s in a very good cause as we desperately need to renovate ramps, sheep fences, gabions and steps around the gardens etc..

We built them up with wood to get the levels right and now they are starting to rot so need to be strengthen with stone on proper foundations. Sometimes it looks as though we have taken on a lot too much, but when it’s sunny and we can sit outside with friends and take a break from Nature, it all looks worthwhile.

A lot of work was put into the ‘Le Petite Moulin Rouge’ project in Birmingham. These two paintings (above) were first exhibited at the Birmingham Botanical Gardens Summer Show. After the Local Council went off the idea of continuing the Super Prix through Birmingham’s streets, the project (right next to the pit stop) was shelved. The last meeting we had on the project was with “Goldie” (now off doing Bond Films and his own music) negotiating to get his graffiti skills for a lavish site board.